Indonesia Completes 19 Infrastructure Projects Worth of US $6B 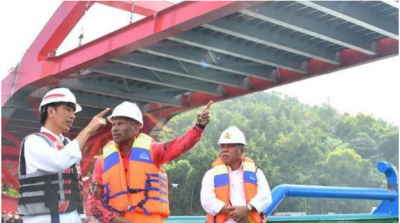 Since 2016 until August 2019, Indonesian government has completed 81 NSP with total investment Rp390 trillion, said Deputy at coordinating minister for economic affairs Wahyu Utomo. The government targeting to develop 223 NSP and other three projects.

At the meeting, Utomo revealed, the government also discussed the limited concession scheme. Beside that, the issue of land acquisition payments by the state asset management institute is also one of the topics of discussion.

Indonesian government needs worth of $429.7 billion during 2020-2024, rise up 20 percent compared to $359.2 billion in 2015-2019 to support infrastructure finance. According to national development planning minister Bambang Brodjonegoro, the rising in investment was aimed at boost infrastructure shares to gross domestic product (GDP) from 43 percent in 2017 to 50 percent by 2024.

The minister added, in order to realize these needs, the government encouraged the role of the private sector in infrastructure development through the government and business entity cooperation scheme as well as the non-government budget investment financing.

Currently, infrastructure funding through the scheme of government and private cooperation has reached 83 projects with a total investment of $40 billion. While for the non-government budget investment financing scheme, 30 projects have been created with a total value of $50 billion.

Brodjonegoro stated that later, development in Indonesia would be directed to use the two alternative schemes. The goal is that the state budget can be allocated to sectors that have a direct impact on the community in the short term.

Meanwhile, nationally there are four projects that received attention from the government, namely $40.6 billion for water resources projects, $40.3 billion trillion for roads and bridges, $9.0 billion for residential infrastructure, and $49.8 billion for housing projects. The government budget is only able to meet 30 percent of the total budget required for infrastructure provision.

“So the government needs business entity cooperation and the non-government budget investment financing to meet 70 percent of the targets,” he said.

Previously, the government received fresh funding from the Asian Development Bank (ADB) worth of $2.6 billion to support strategic infrastructure projects during 2019. The biggest projects targeted by ADB was the construction of two power plants, one of which was $600 million to build a power plant in Papua.

The bank has also prepared a credit facility worth $100 million to be channeled to PT Indonesia Infrastructure Finance that will be used to improve Palu, Sulawesi’ infrastructure projects such as roads, water sanitation, and irrigation facilities.

Javascript not detected. Javascript required for this site to function. Please enable it in your browser settings and refresh this page.